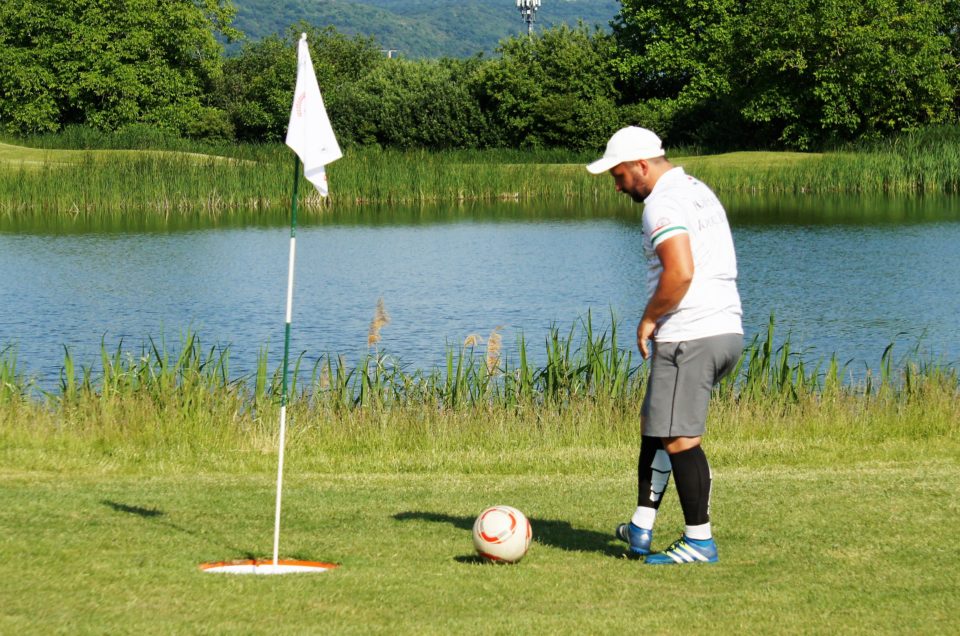 Almost 130 players have been participated next to Lake Balaton in Hungary at the Traditional Footgolf Cup. Bence Bacskai won the 2 day-long tournament, while Slovakia won the team competition. Susie Berg was the best among the ladies and Steve Crane in the senior category.

The Traditional Footgolf Cup hosted the FIFG 500, European Footgolf Grand Slam, part of the EFT and European Neighbour Trophy tournament this weekend in a new place on the North part of Lake Balaton in Balatonudvari at Balaton Golf Club. On the first day the players tried the brand new Bogey course, where David Mancino (SUI) was the best. He has lost his baggage in Budapest at the airport, he was given a pair of shoes and Lionel Jacot’s dress. Now, he has the course record on that course…

Although the baggage was posted to him to the course, he wore the same boots on Sunday also after the great results he achieved before. He started well on the final day as well, his lead was 6 kicks ahead of the rivals, but Bence Bacskai (HUN) catched him on hole 9. They were on -15, where from the Hungarian made no mistakes and finished the tournament with overall -20. Before the last hole, he knew, if he played safe, he will win the Traditional. When his third kick stopped three metres from the hole, the crowd go wild. The last kick of the tournament ment, Bence Bacskai is the champion of the weekend, he is the first Hungarian winner of the Traditional since 2013 (Krisztián Bogár).

On the second place two Slovak, Michal Dian and Tomas Kikus tied, and the three hole playoff was won by Dian.

Among the seniors, Alex Kober (GER) was the leader after Saturday, but Steve Crane performed better today winning the category ahead of the German. The third place was decided among four Hungarians, László Biró reached the podium ahead of his compatriots.

Slovakia’s best four players collected the most points winning the team competition ahead of Hungary and Italy.