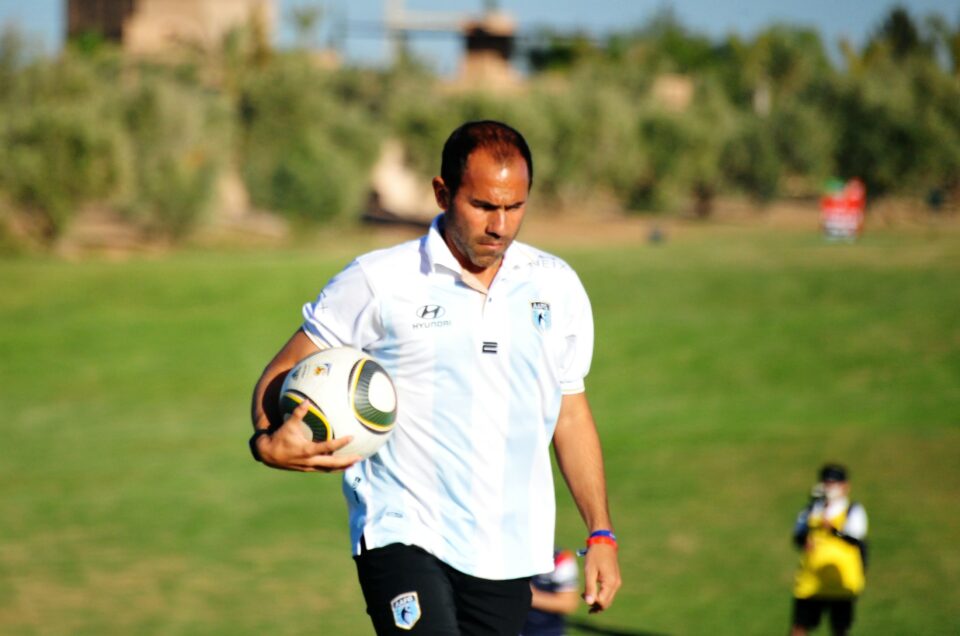 Argentinian Matias Perrone was overcome with emotion as he was crowned 2018 FootGolf World Cup Champion on Sunday 16th December. Lurking just behind the leaders, Perrone shot eight birdies in his final round to end on 16 under, a two shot lead over Team UK’s Ben Clarke. Perrone’s triumph ensured the men’s individual trophy stayed in Argentina, just two years after Christian Otero was victor at the 2016 World Cup in Buenos Aires.

Former Argentina international footballer, Fabian Ayala, stormed the final round with seven birdies and two eagles and finished in third on 13 under. Ayala had to play a third-place play-off against FrenchmanNicolas Pussini who also finished on 13 under.
Perrone’s victory was a popular one amongst Team Argentina but also many other nations, as he is a well-known ambassador for the game. He took up footgolf in 2012, before many other players had heard of it, and has worked tirelessly to promote the sport worldwide. Perrone can now add 2018 World Champion to his victories at the French Open in 2015 and on the Argentine FootGolf Pro Tour.

Team UK dominated the women’s competition from start to finish in Morocco and the nation’s top three places were never threatened during the final. However, it was Sophie Brown from Kent who was crowned the first ever female FootGolf World Cup champion after completing the final round with a score of six under. Claire Williams finished in second on par and Natalie Richardson in third on plus two.

In the senior competition, the match went down to the final hole with Italian Stefano Grigolo edging out Dutchman Marcel Peeper with a birdie on the 18th. Grigolo finished the final round on 24 under, with Peeper on 23 under, and Frenchman Olivier Grava in third on 22 under. Grava had been leading the senior competition up until the final day. There were jubilant scenes of celebration from Team Italy, who were disappointed earlier in the week when they suffered a shock defeat to Spain in the team competition.

The eventual winners of the team competition were France – who defeated Team UK on ‘goal difference’ on Saturday.

The FootGolf World Cup Finals 2018 took place in Marrakesh between 9-16 December. Over 500 of the world’s best FootGolf players took part from 33 nations for both the 2018 World Cup Team Trophy and the 2018 Individual World Champion Trophy at stake.

Matias Perrone, 2018 FootGolf World Champion:
“I am very happy for what I achieved. The principal goal of this tournament was to enjoy it. I am so lucky that I reached the final stage and I am lucky to play there. I am so happy because I also enjoyed all the kicks I did in those two course but they were very difficult. I am happy because I enjoy it and I am happy because I was the best and beat my rivals. I am happy because I played my style of footgolf and had confidence in every shot, every putt. I never think too much, just the line, just the ball and then I kick – so when you are in that way, everything is perfect. It’s like a perfect mental state so I am really happy for that. Of course I work hard for that, I spend a lot of time, I spend a lot of energy to be in that kind of situation so it’s a great, great moment for me.
Fabian Ayala, Third Place:
“We hope that our FootGolf keeps improving in the future and I am so happy for my colleague that he wins the title – he deserves it. It wasn’t going so well as a team for us but we have our footgolf at the best level in the world. And we hope this is the marker for the future.”

Sophie Brown, Ladies 2018 FIFG FootGolf World Champion:
“I think to be honest my approaching was a lot better than normal. I was leaving myself nice easy tap in birdies which was nice. I think my round today was four under and I think on this course is quite a respectable score. Just a mixture of everything really, I did finish World Number One in the ranking and obviously to play the World Cup it is still nice to try to keep, well, obviously I can’t be beaten as World Cup number one, but obviously to be the World Cup champion is still an amazing feeling.”

​Stefano Grigolo, Seniors 2018 FIFG FootGolf World Champion:
“The field was difficult compared with Montgomerie, the main thing is to look for the holes that we don’t know. I got some confidence because I saw that the ball was going in. Me and my caddie Tomasso were so calm, we tried to do the most simpliest work and finding the right moment to make the ball go in the hole. We saw that we can only win on the 18th hole so when the ball enters on the 18th hole, we thought it’s better that we close it out now. Finally when the ball went in, we became champions of the world.”